Well I just wrapped up my last local tournament of the month and it was a great time, except for the losing part.

I attended the 1st AOS tournament of the year at Montags Games here in Pearland Texas. I want to thank the owner Guy for opening up the store early and putting up with all of us loud AOS players. Giant shout out to Tim F for running the event and getting players from all over Houston to come down.

Before we go any farther I want to say that I am a bit swamped with work and life at the moment so I will not be doing a full blown right up. However I will give a down and dirt synopsis of what happened.

This was a three round tournament with a cap of 12 players.  Several players from The Texas Masters were in attendance.

I was running my Legion of Night list that I had been messing around with for a month or so. This tournament was going to be the deciding factor on whether I would be painting and playing this list for The Lone Star GT. I had a low win percentage with the list, however ALL my games were very close and I never felt out of them.

I was matched up against Kevin R, he was running Nagash with 40 Chains and 30 Grimghast Reapers. The mission was Starfall. I thought that this would be a good game and was not overly confident or worried. I just needed to stay out of Hand of Dust through the Portal range.

This ended up being my biggest loss to date with my Legion of Night. I misplaced a grave sight and was not able to bring out my Skeletons from it. So my Right side was empty and he had 30 GGR on it. At the start of turn 2  we rolled for the first objective and it landed on that side. So with me miss-deploying the Grave and not having any way to get my 40 blocks to that side of the board now, the game would virtually be over. If I could not make something happen. During my turn I was able to bring up my Skeletons and dominate The L side of the board but with no objectives on that side it would not matter. To make matters worse during his turn I had to move my Dragon up a bit to get in range of a Grave and he got hand of dusted. This whole game was just bad playing by me and bad luck by the dice. I conceded at the middle of turn 3. The only positive I can take away from this is that fact that Kevin ended up winning the tournament. So at least my beat-down was from the undefeated player. 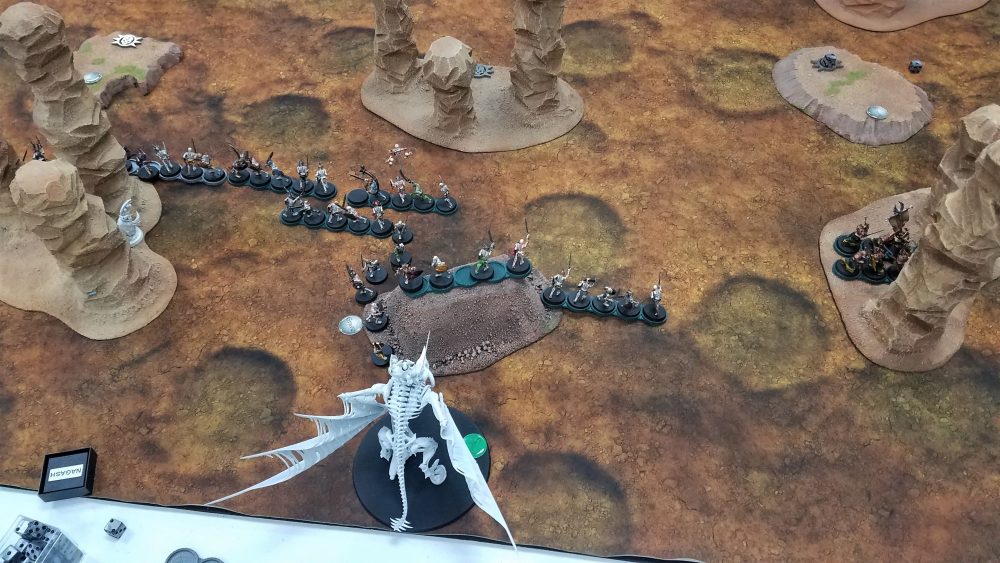 Thats a lot of Ghost to kill, re-kill?: 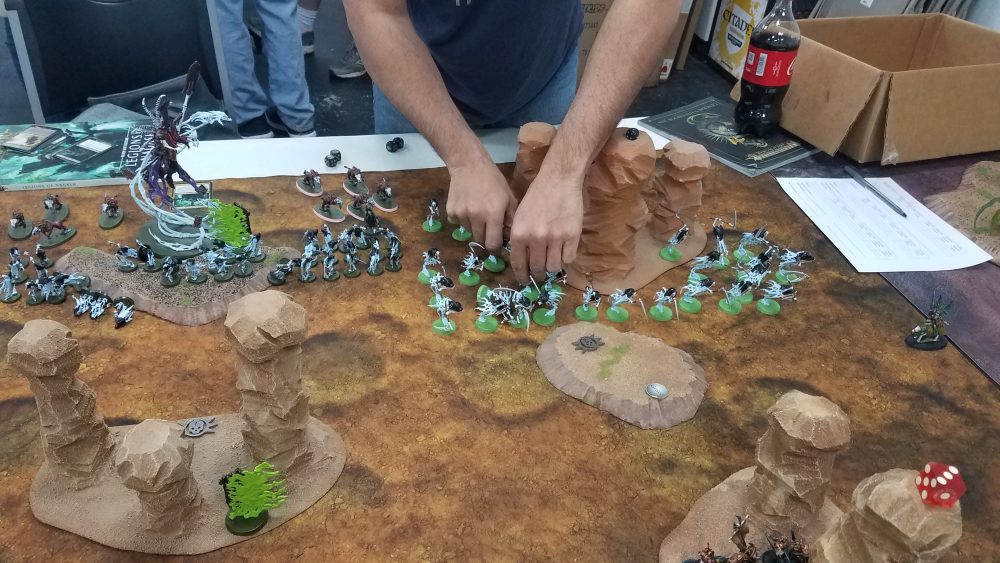 They took the point and killed the King, Yeah that side is lost: 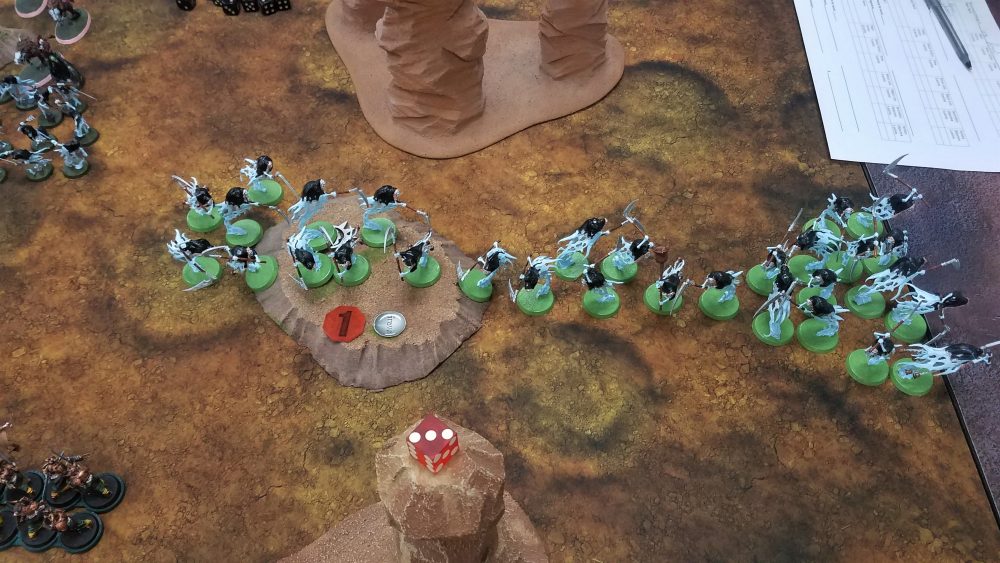 Well I am winning the Left side at least: 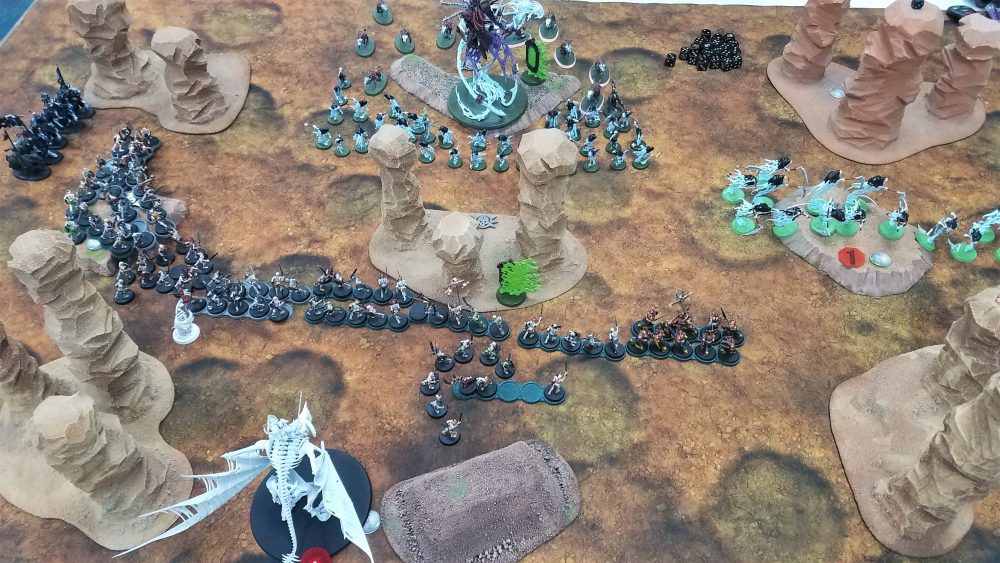 Matched up against Spencer B. He was running a fun Khorne list with Tyrants of Blood and 4 Bloodthirsters. He also had 3 min units of Bloodreaver. Oh yeah and a Exalted Greater Deamon of Khorne! I was honestly scared of the list. The mission was total commitment, Super awesome I could not do all my fun outflank shenanigans. So the purpose of the list was totally useless. When I found out the mission and match up I was bummed, however in the end it worked in my favor.  My game plan was to just stay back and try and weather the storm.  5 Bloodthristers are scary however all I needed to do was put a few wounds on them and they would not be very effective at killing 40 wounds of Skeletons. And that is the way it played out. He melted my first screen, however I brought them right back on my turn. I used the Grave Guard and Vampire to kill his Greater deamon and I killed a Rage Thirster with Skeletons. In the end I killed all 5 of the Tyrants and had only lost my Necromancer. We called it at the end of 3. It was a fun game and a big reminder why my Tyrants are still on the shelf from last year. Bloodthirsters just cannot deal with hoards.  I was able to get my secondary and tertiary objectives. So I was sitting in an ok spot to try and make a run at the top 3 last round.

Holding down the corner: 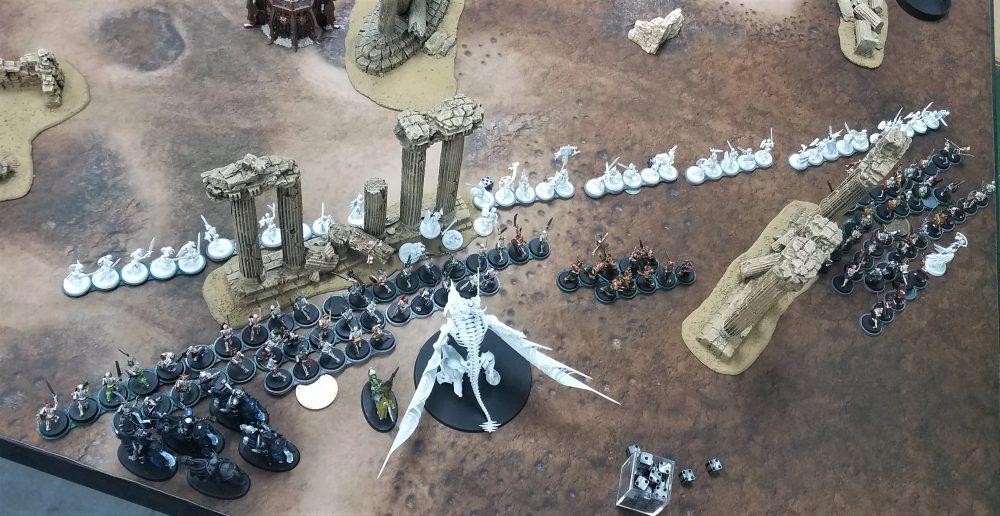 First line of Skeletons gone, next line up. 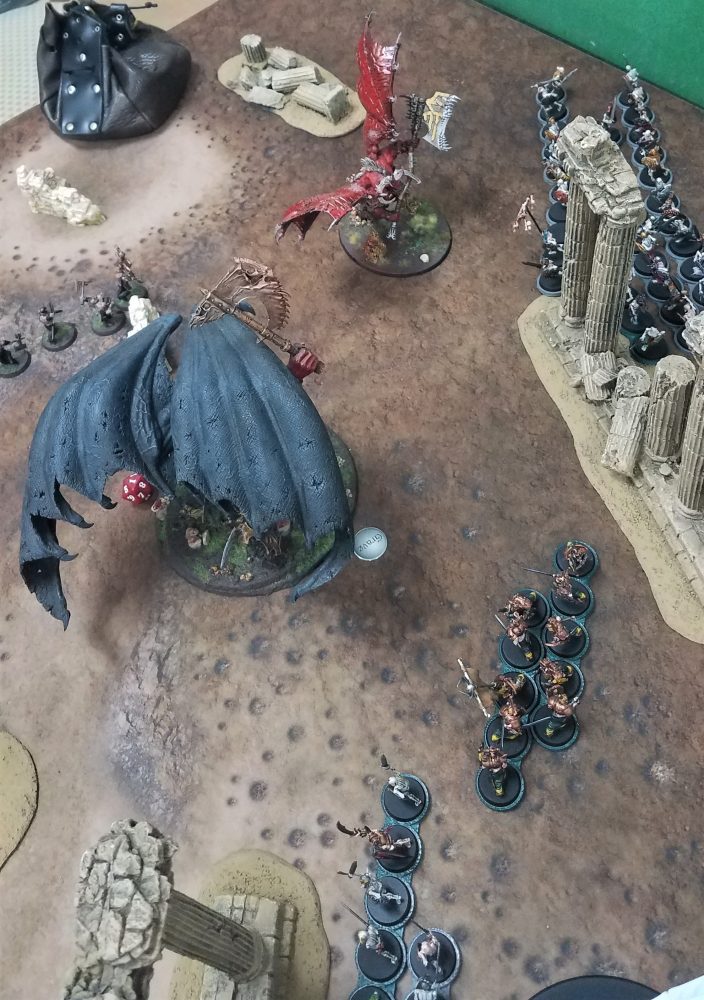 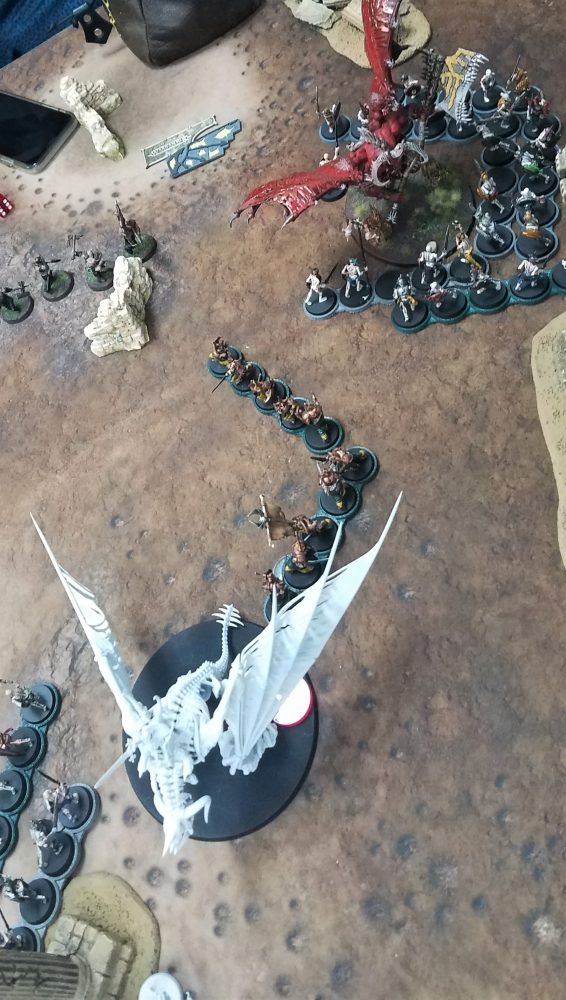 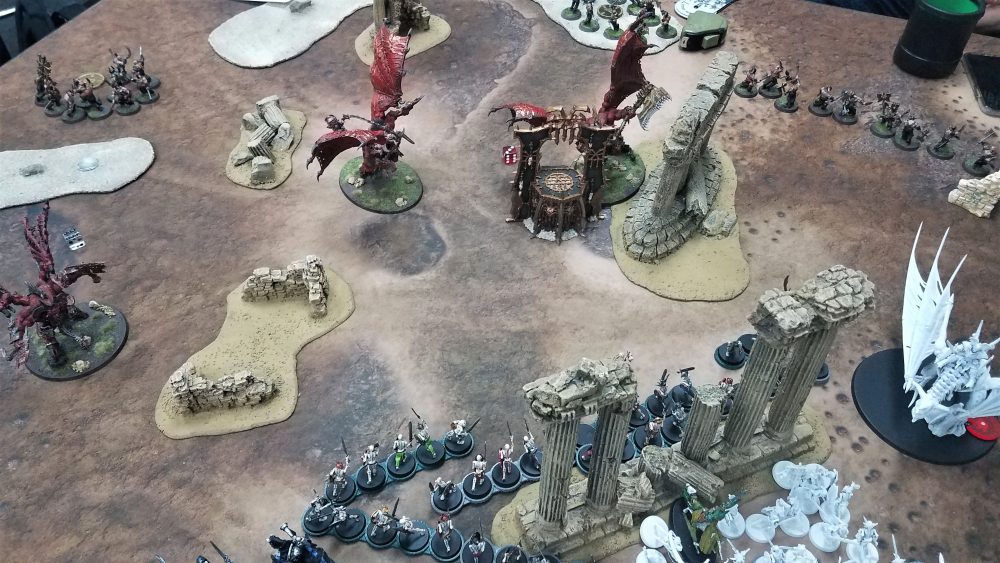 No 6s to wound please! 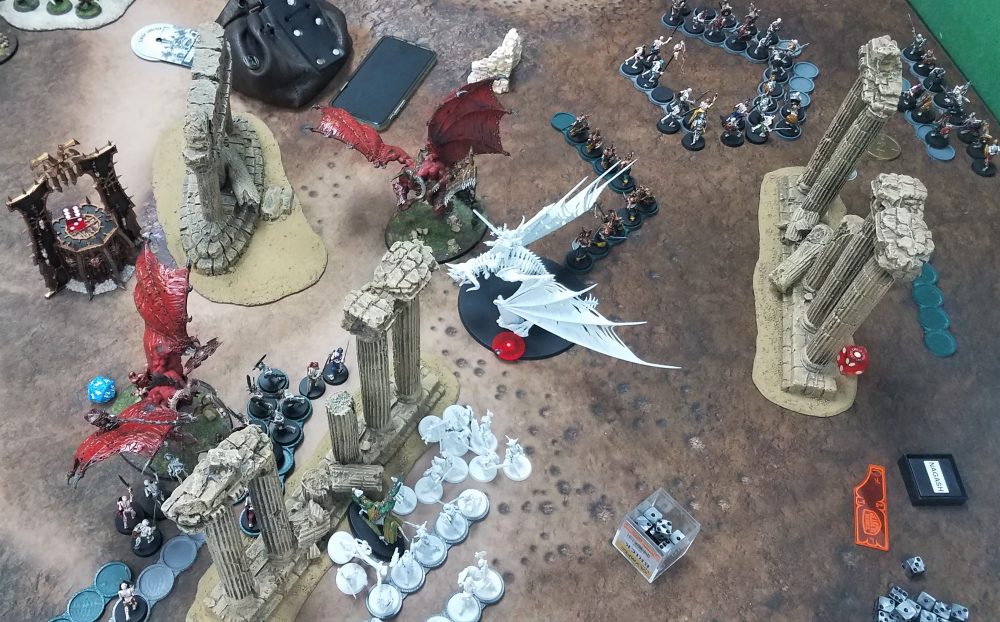 I got to play James W in the last game he was running a Daughters snake list. Temple nest, with a very balanced army of close combat snakes, shooty snakes HQ support and Morathi. The mission was_____ and favored me on paper. I was in a great spot to get on all the points and win easily. I brought stuff up from the grave outflanked and ran everyone into position. I was in a great spot after my turn 1 movement. However the biggest issue was I failed 3 charges and the one on the GG I re-rolled. I was trying to get an alpha strike on Morathi, to take a few wounds off before she transformed. I was still doing ok at the end of turn 1 but I did not want him to get the double it would hurt. Of course he rolled and got the double. I was still ok and felt I could live through it and be in a great spot for my turn. However my rolling went down hill. I rolled lots of 1s for the saves on my vampire and he was down to 3 wounds. Then I made the biggest mistake in a while by deciding to pile into the Snakes and try and kill them instead of Morathi. I ended up rolling bunches, I said bunches of 1 on my hit rolls and all those mortal wounds came back at me and killed my dragon. What a day. All I had to do was not pile in and hit Morathi try to do a few wounds to her, then during my turn run away and get to my back gravesites, then summon a 40 block. I would also drink the chalice and if I got real lucky I could make a long charge with the 40block and put a few more wounds on Morathi and the Snakes. However because of my foolishness I got greedy and it bit me in the ass. On the other side I of the board I was in an ok spot. I had 40 Skeletons about to make a very nice charge into his units that were threatening the L objective. I was able to cast Danse Macabre on them and I also gave them an extra attack with WK command ability. So 200 attacks hitting on 3 wounding on 4. In theory I should have wiped out both units on the first set of attacks, however if any were left my second activation would handle them. Yeah total suckaga. I did about 15 wounds to myself by rolling 1s, and I did about the same amount of wounds back to his units. I rolled like trash and he rolled above average. My second round of attacks did a little better, but the unit was going to die to battleshock. At this point I could not bring units back and it looked grim. I added up the points and what would have to happen for me to pull out a win and realized that I was beaten.  So between 1 tactical error and a boat load of bad dice I was defeated by turn 3

Holding down the left: 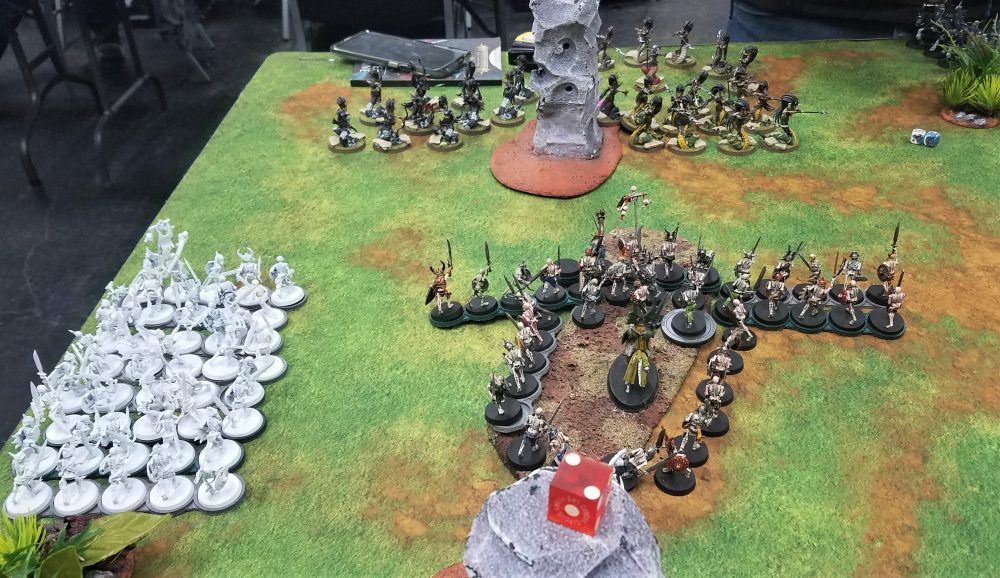 Holding down the right: 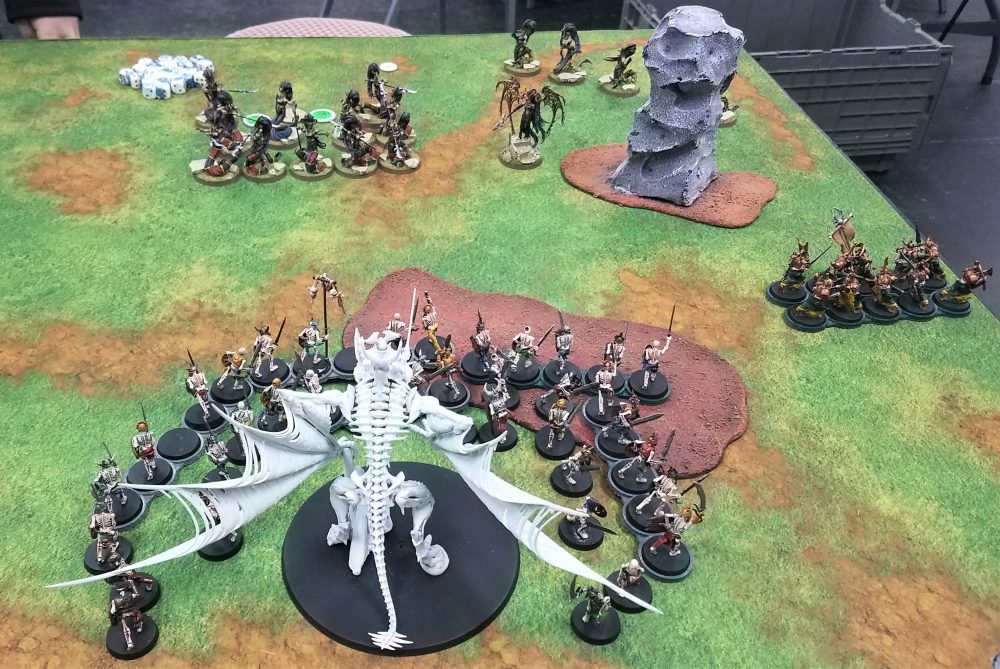 We wont last long against fire power like that!: 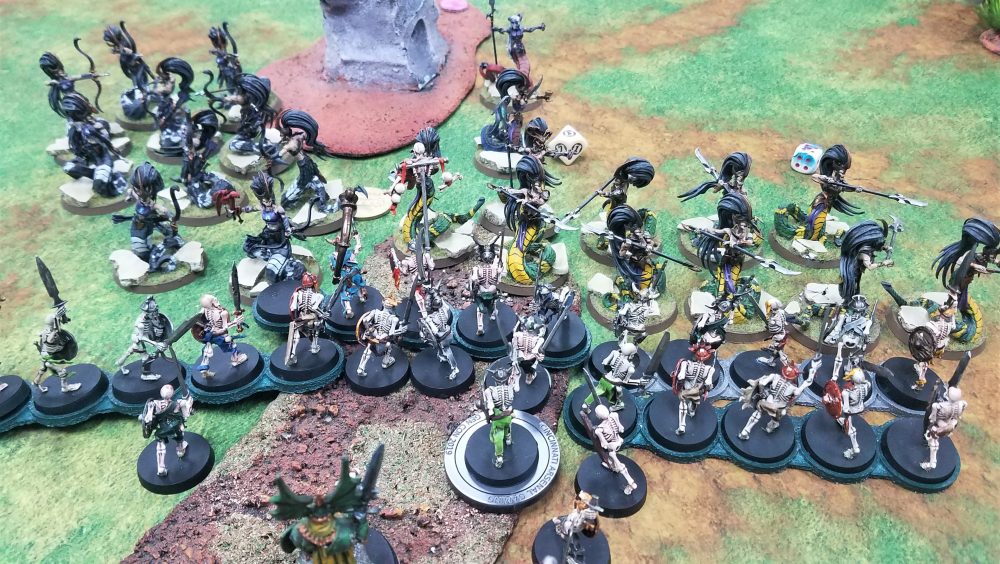 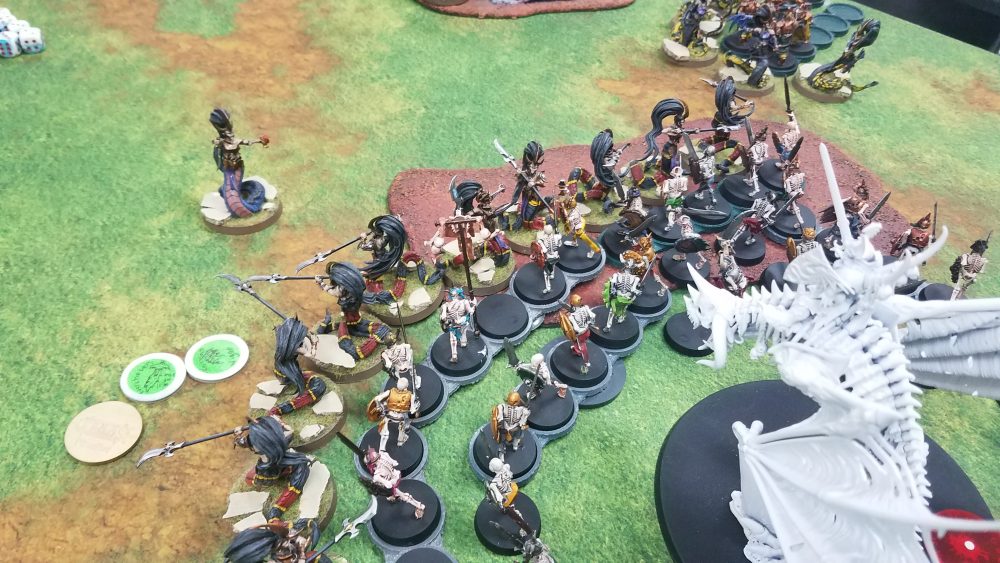 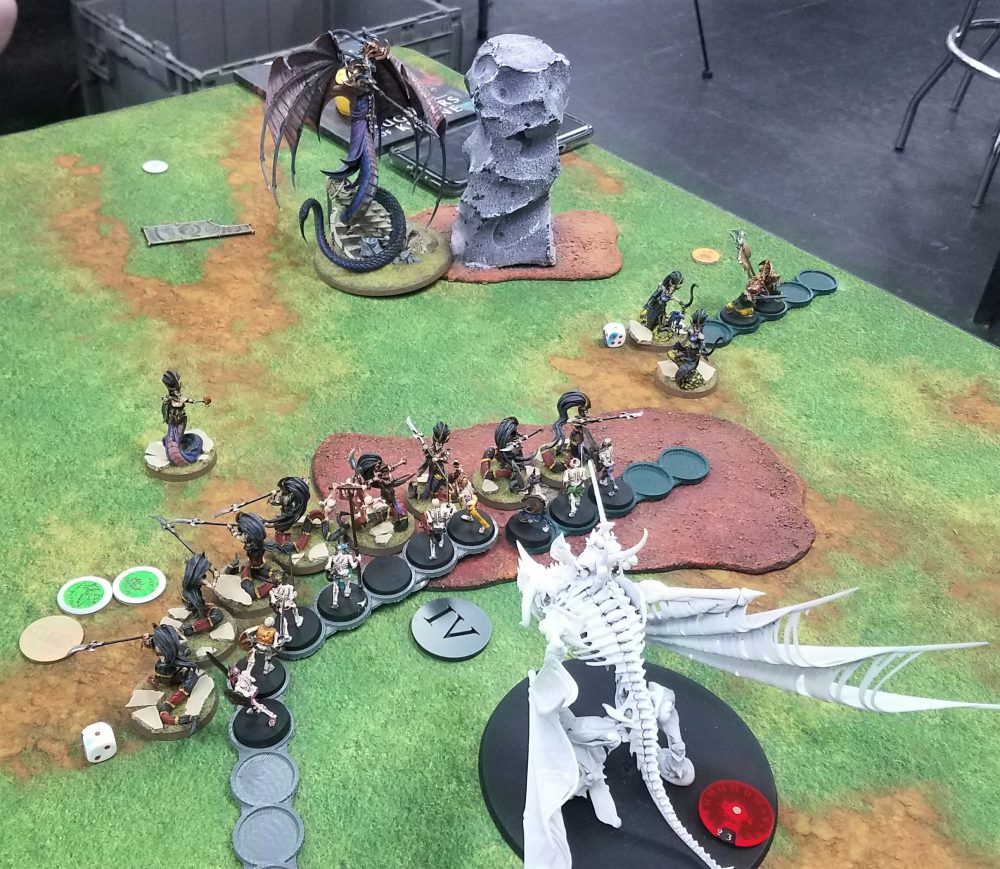 At this point I was confident the Skeletons could finish off the Snakes: 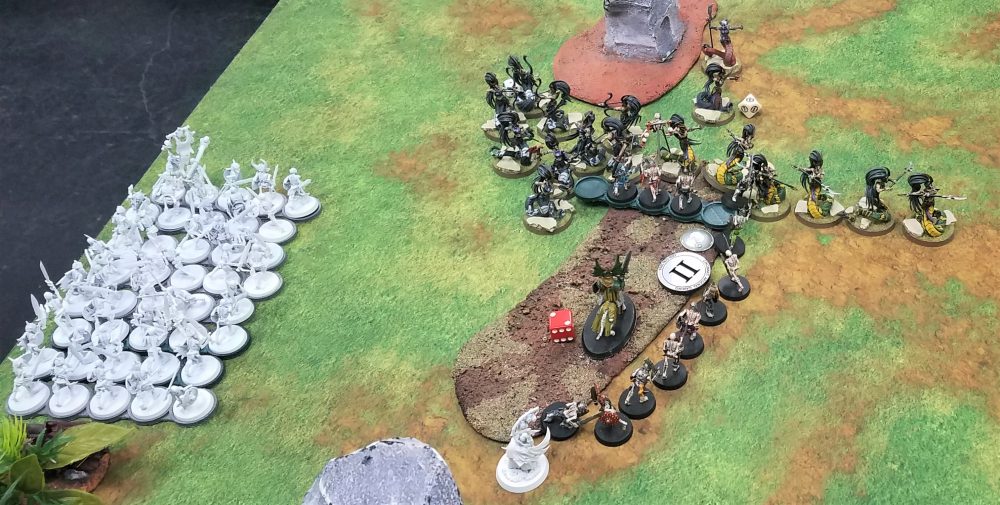 This is right before I made my big mistake…what a fool: 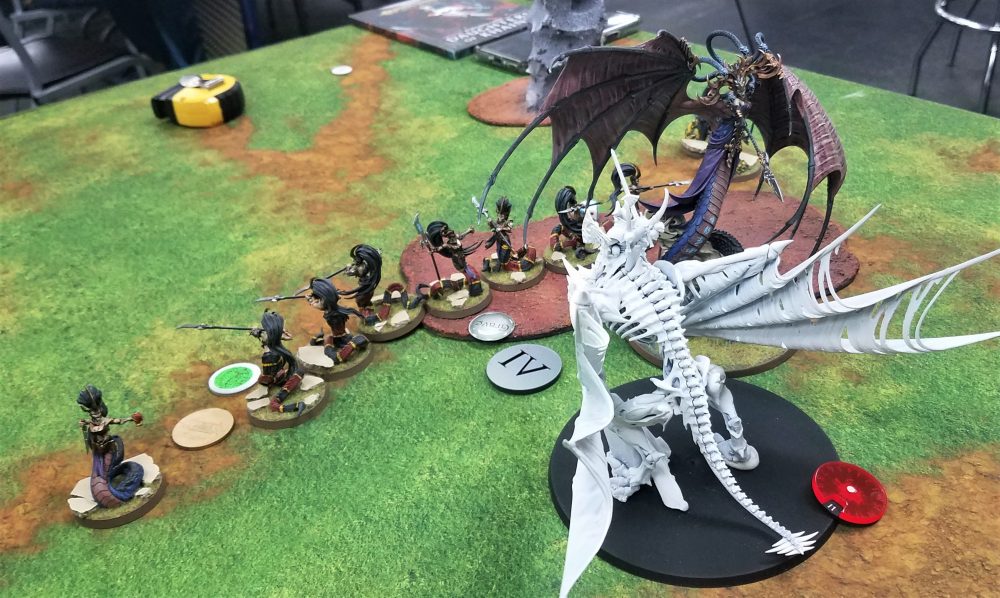 You would think the snakes would be dead by now 🙁 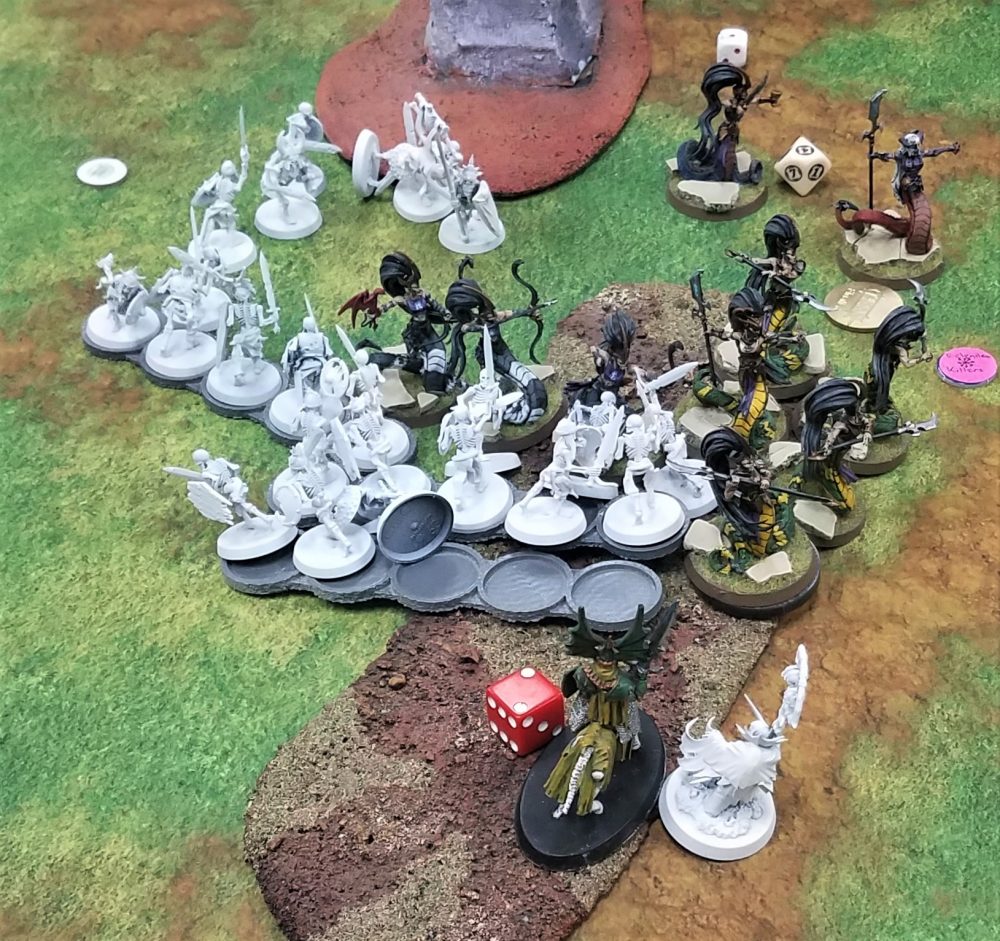 In the end I finished the tournament 1/3 and came in 7th place out of 12. Not the showing I would have hopped. I still honestly believe that the list can win games. I still feel it in my heart. However I had to make a decision to paint it up or move in another direction for The Lone Star GT. To complete the army for the GT I would have to paint 40 SW 1 BK, and Vampire on Dragon. Then base another 100+ 25mm bases. Not that it would be undoubted, however it would be a big investment of time.

After thinking on it for a a few days I came to the conclusion that I may as well start on a new army for Dallas. If I spent all the time and effort on the Legion of Night list it would take up a good portion of the year. One of the bigger issues with the army is that I dont really want to paint all those skeletons, especially to the standard that I am try to accomplish for the GTs later in the year. “The Lone Star GT is going to be a minimum paint job at best, with possibly no display board.”

I had planned to try and up my painting game for the next army I did. Last year I painted 3 armies and each one got a little worse on the painting scale. I also wanted an army that could win 4+ games at a GT. Could the Legion of Night list do that? Yes if I did not play like a fool and if missions and match ups stacked in my favor. I had been rolling around a few ideas on my next army. I still hold to my List Design Principles, and I continue to search for my perfect balance within that criteria. I still think that the new Seraphon book may fulfill all these needs. However I am not sure how long until it is released. With all that said I have decided to move onto my next army project. A project that will soon get the Nurf bat in the upcoming GHB if not before. I have decided to play the despised, the infamous, the way broken before the first FAQ, the one the only, you guessed it Changehost. I know, I know it is broken as hell right now. The emergency FAQs made it a little more reasonable however it does what I am looking for very nicely. I will go more in depth on my thought about my starting list and how I plan to play it in a future post, but for now I am already on the road to building my Tzeentch army. I just hope I can get 1 local and the Lone Star GT in the books with it before it gets totally worthless after the GHB 2020.