I have mentioned in previous post a few of the ideas that I had for my next tournament list. As I work through this process I thought it would be a great idea to get feedback from the community about some of my lists and ideas. Especially because I have had very little to no experience playing Flesh-Eaters and Blades of Khorne. I know many of you have played against FEC or are dedicated Khorne players and have a wealth of knowledge to help me on my next project. All in all I just want to start an open debate about the positive and negative aspects of some of the directions I may go. The lists that I have are just brainstorming so feel free to add any criticism/critiques you may have on the Facebook post, to start an open debate.

When starting to design a competitive list there ares several factors that I like to take into consideration. These fall in line with a doctrine approach to playing and you may have different ideas on what a list should do or the importance I place on a given factor. Please share any thoughts you may have on the factors I am listing.

The following factors are the primary considerations that I look at when building a list. I have placed these factors in an approximate order of importance, however based on a given army build some may move up or down the list based on unit characteristics.

It is killed or be killed in AOS, If you cannot destroy the opponents models you have very little chance of winning the game. Generally these units are referred to as hammer units. They are meant to remove models from the opposing army.  There are a variety of ways that a unit can remove models from the enemy; spells, shooting, volume of attacks, quality of attacks and special abilities. Currently some of the best hammer units in the game are Deepkin eels, Witch Aelves, and The Keeper of Secrets. Generally every army book will have at least one hammer unit or in many cases several option.

What I look for in  hammer unit: They should have the ability to deal with hoards, elite unit, and Behemoths with equal ease. They should have some form of survivability; good saves, or large wound pools, or resurrection. And moderate mobility.

Things that can be concerns when looking for hammers: Point cost, is it costed correctly for the job it needs to accomplish. survivability, Glass Cannon? list synergy, do they support or are they easily supported by the rest of the list.

How hard is it to remove this unit from the board. A unit can have staying power though shear numbers, great saves, resurrections or buffs. These units are generally referred to ans anvils.  Staying power is less important than killing power in my mind because of the nature of tournament games. You usually on reach 3-4 turns in a tournament. In a casual game when you and your friends have all day, this factor is more important that damage output. However players usually do not have the luxury of playing a 4 hour game in a tournament setting. With all this said it is still important to have some form of staying power. The game is still objective based and holding them, is what wins games. It is also important from a tactical level when you look at units that you use to hold flanks, the backfield, become speed bumps for your enemies hammer units. In some cases units can fill the roll of hammer and anvil, “Skellitons hoards, Skullcrushers”.

What I look for in an anvil unit: being ale to survive, ether through 40+ wound pools, goods saves, ethereal, and resurrection.

Concerns: over costed, army syngery, mobility, requiring spells and other buff mechanics to make them work.

Winning and losing the game is based on holding objectves. If you can hold all of yours, you will only need to take one from your opponent to win a game. You can ether do this by killing all the enemy, of just having more bodies. Generally speaking hoard armies have an easier time at holding objectives.  Protect what you have then worry about taking more, minor victories are better than loses.

Consideration: What units are holding your back line objectives? Are they strong enough to survive a round of deep strike/alpha strike fighting? Are there enough units to hold all your objectives “some of the new mission you start with 4”.

In many lists this task it relegated to chaff units. This is not in general a bad tactic, however understanding your opponents capabilities is important. Ask them these questions; do you have anything that deep strikes in, can you bring things on from a board edge, how far can X unit move, how does your summoning placement work. Do you have a unit that ignores the 9 inch rule. Understating the enemy capabilities before you deploy units is an important step in protecting your objectives.

Any army list should have the capability to threaten opponents objectives or quickly displace to assist were needed. Each army should have a way to move quickly around the board in some fashion. In a tournament turns are limited and a unit being able to move 15 plus inches in a turn can be game winning.

There are two type of ways units have broad board reach:

#1 conventional movement. They have a high movement characteristic, or they they have a spell or ability that adds to their movement characteristic on a given turn. These units are used to move quickly and harass flanks, take objectives or move around the anvil to take out support.  Examples of units with good conventional movement are; Zombie dragons “especially with Pinons cast on them” and Morrsarr Guard. Calvary units in many Battletomes excel at filling this role. The Fly keyword is another important consideration when looking at units with convention movement

Denying space on the board to an opponent can benefit you greatly. When you deny space in your territory you are dictating to the opponent where and when they can move units. As was highlighted in The Board Reach factor, many Battletomes rely on being able to teleport around the battlefield and threaten your back line units. However most units in AOS with an unconventional movement ability must be placed 9 inches away from an enemy model. You can use this to your advantage by spacing out models and cutting off board edges and good deep strike zones. If you bubble wrap you back field your opponent will be forced to fight more conventionally with its units or place them in non optimal positions. The more of the Board you can cover the more YOU dictate the battle.

Large model count units work best for this. However MSU can also be used in the same manor. Remember space your models out for maximum effect.

Once again these factors can be moved up and down the list based on play style or Battletome composition. How would you rank these factors? What other considerations would you have?

I will be presenting 3 lists for your consideration. 1 Khorne and 2 Flesh Eaters Court. I please feel free to critique them as you see fit. I am not 100% set on anything in the list and I am open to any suggestions. 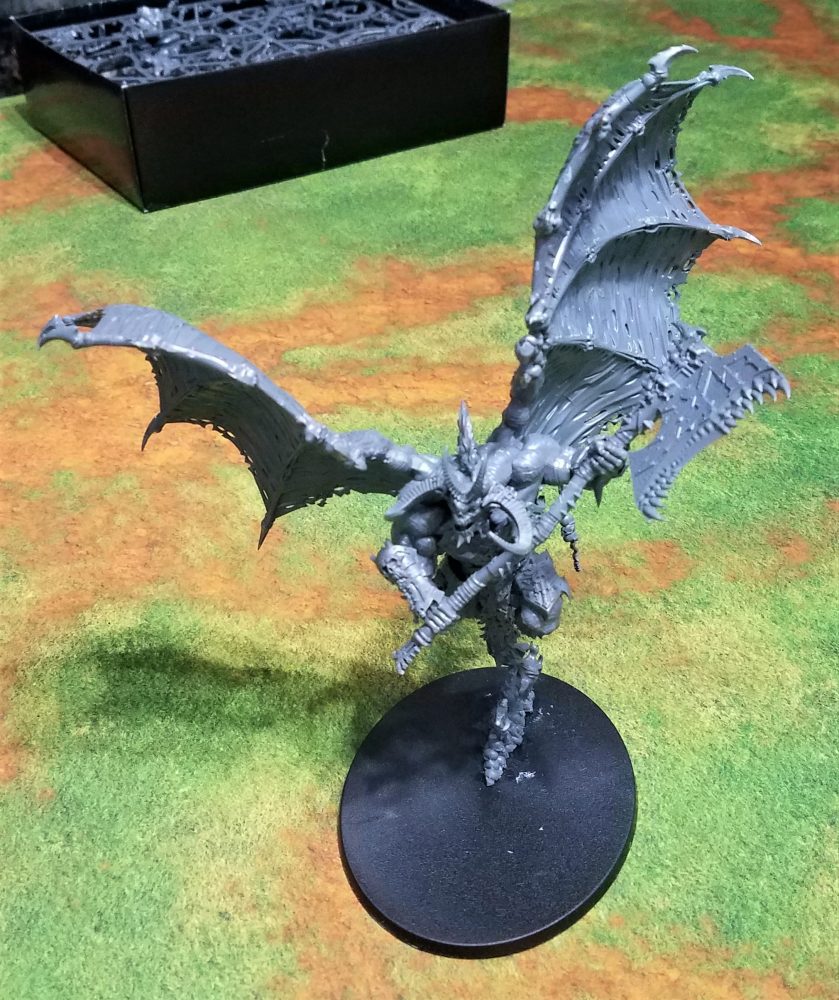 I am very excited to build a Tyrants list. It has many of the design principles that I look for in a list.

I have been wanting to build A Flesh Eaters Court army for a while. I have about 50 FEC models painted up from when I played Vampire Counts in Warhammer 8th editon. I was drawn to the idea of a Grislegore army because the thought of having 3-5 large flying monsters on the table sounds fun. My primary concern in this list is just model count. I am not sure I will be able to take and hold objectives especially after I lose a Terrorgheist or 2. 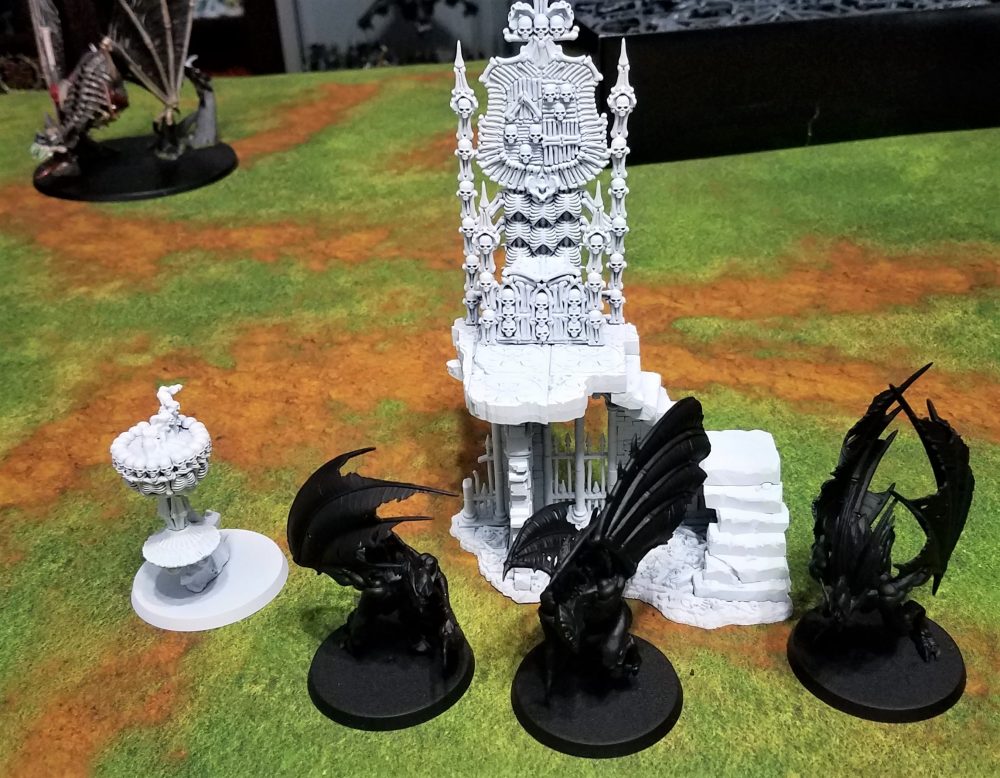 This list is somewhat similar to the previous one, however it trades the damage output of a Tgheist for more staying power and board control of Ghouls. I really wanted to add in a battalion to this list, but nothing seemed to make the points work the way I wanted it to. I think the King’s Ghouls and Attendants at Court are both strong choices, for any FEC list.

I was able to buy a command point in this list, that will allow me to bring in 2 Knight units first turn if I needed to.

Well that is what I have to start working with. Non of these are perfect and against some opponents they will not work. However I think there is potential lurking in the list. Help me answer some of the questions I have.

Thank you for taking the time to read my post and give any feedback.