It is about that time! I have wrapped up all the painting for the Texas Masters. I have just about everything I need printed, packed, and ready to go to DFW.

Thoughts on The Masters

This has been a fun journey over the last few months. Building painting and learning about a new army. I am so thankful for this event and to all the people who have contributed to making it happen. Regardless of how I do at this event I plan on being an active participant next season and try to make it back to the top 10. I honestly think it will be a much harder task next year, with a shifting meta and many more good players involved. If nothing else I can say I made it to the Masters the inaugural year. It has been a fun journey the past 12 months learning a new game system and building 3 armies.

My list. Well I have been running about a 33% win ratio with this list…. So if I win 2 games at the tournament I would have above average. I have gotten a little better at setting up and running the list. Generally just understanding about this capabilities. I think the list is a hard counter to some and it just gets rolled by others. The biggest thing I am hopping for is my dice being hot at key moments. This list not getting double turned is important, “obviously”. Also here of late my War Lightning Cannons have been rolling lots of 6s for the power number. I need that to stop! Come on Engineers get it together!

I do not expect to win the tournament at all, but in my hopes and dreams I would like to win best Chaos army, just to get that awesome trophy. A top 10 finish would be satisfying and I would walk away happy with that. However I have a feeling I may be bottom 3.

I plan on entering a few models in the painting competition. I have decided to take a Necromancer for the small model, but I am not sure if I want to bring Nagash for the large model. I am undecided on the unit category. I really need to enter all 3 because you never know, I just don’t really want to have extra stuff I am packing and dragging up with me.

I will be bringing the family along with me, so I will probably not get to hang out that much after hours with other people. But hope to see some people playing Friday night and have a chat.

I plan on taking pictures and doing an in-depth battle report after the event. I just need to keep up with my notes and pictures.

Well I managed to do it. I was not 100% confident that I was going to get it all done, but here it is. 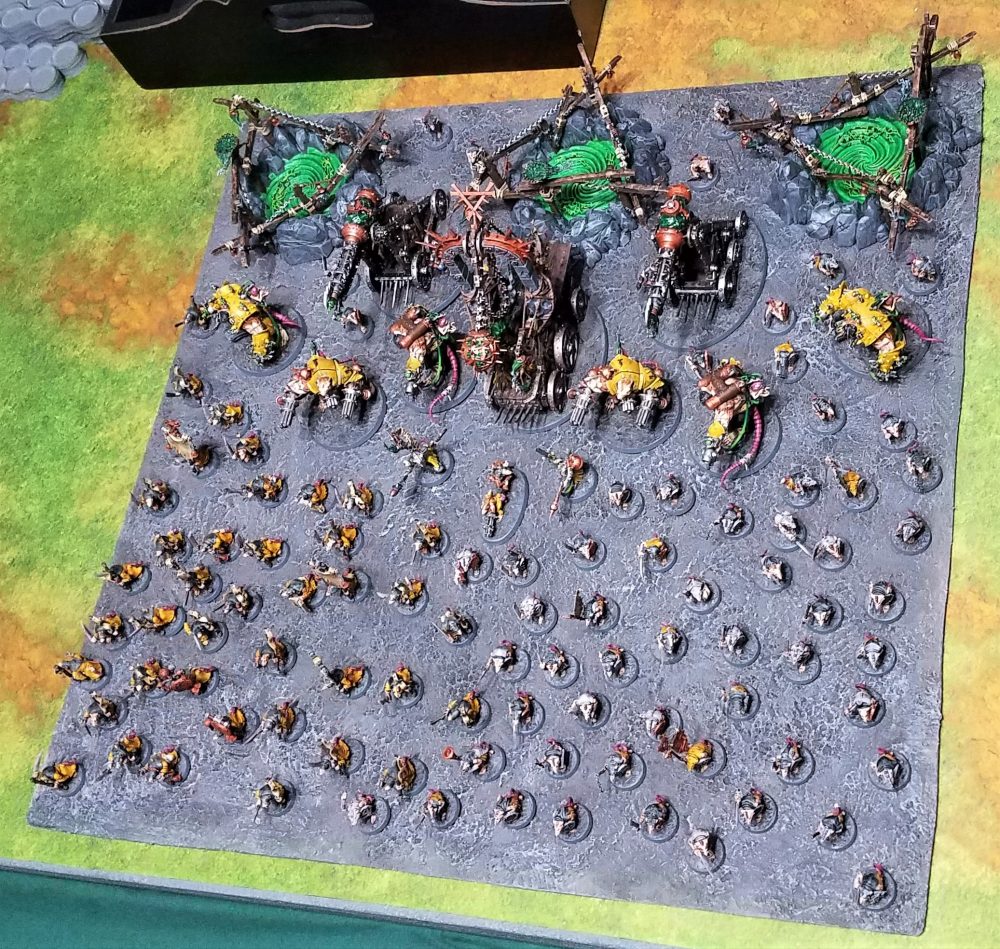 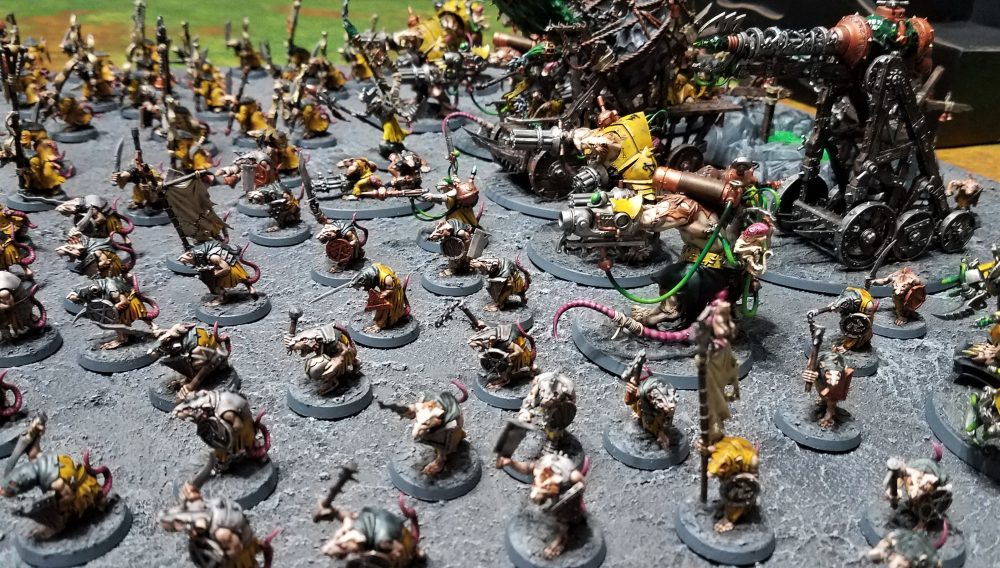 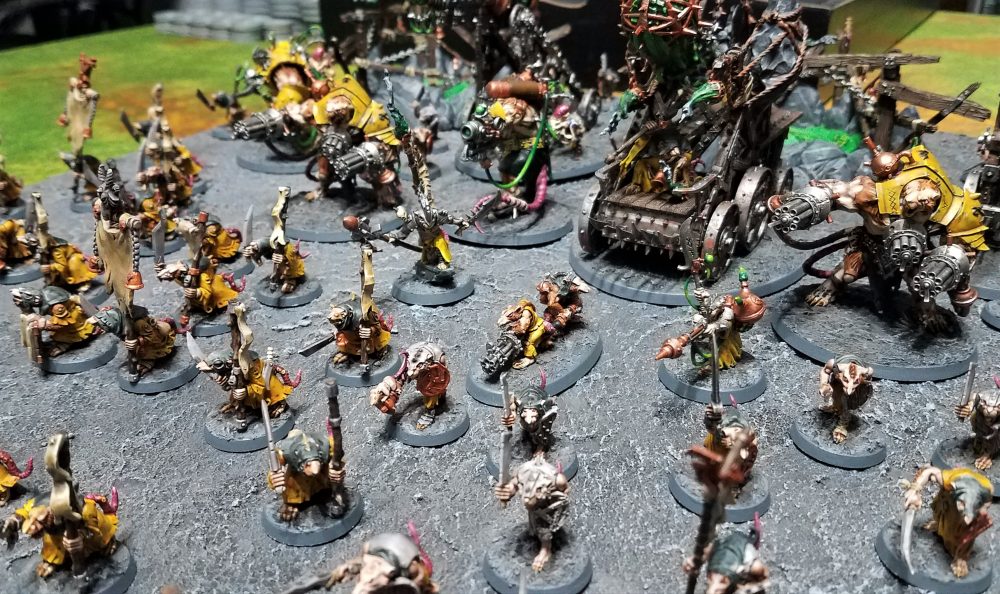 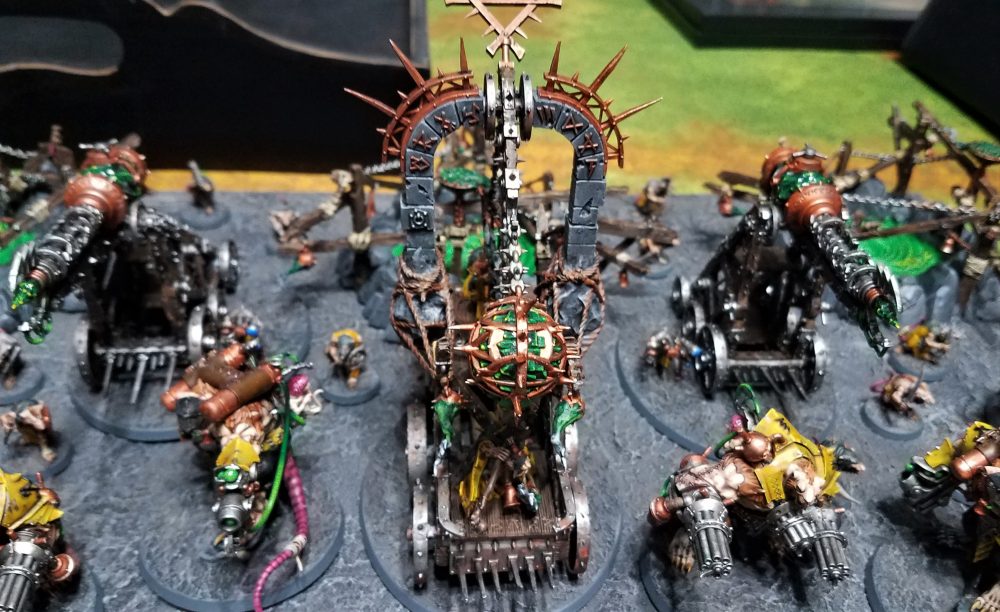 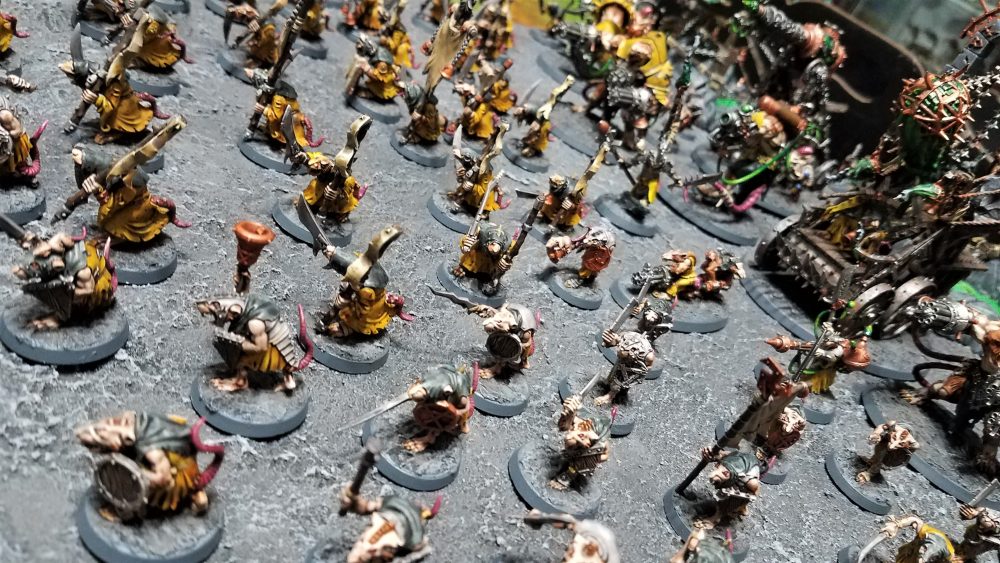 I cut a few corners with this army, but it came out ok. The one thing that I would have liked to have done was but icons on all the banners and scrolls. They are just blank right now.

I think using contrast was a success. It does not work on all the parts but looks very good on some. I believe that it is a great tool for the hobby toolkit. I can see using it on other projects in the future. It creates a solid table top standard. So there is 0 excuses for those of you with no paint on your models.

This like any hobby project I learned something. The Contrast paint was one, but also I made my own texture paint for basing. It was very easy and I think I need to make a blog post to share in the future.

Also here are the last 3 units for the army: 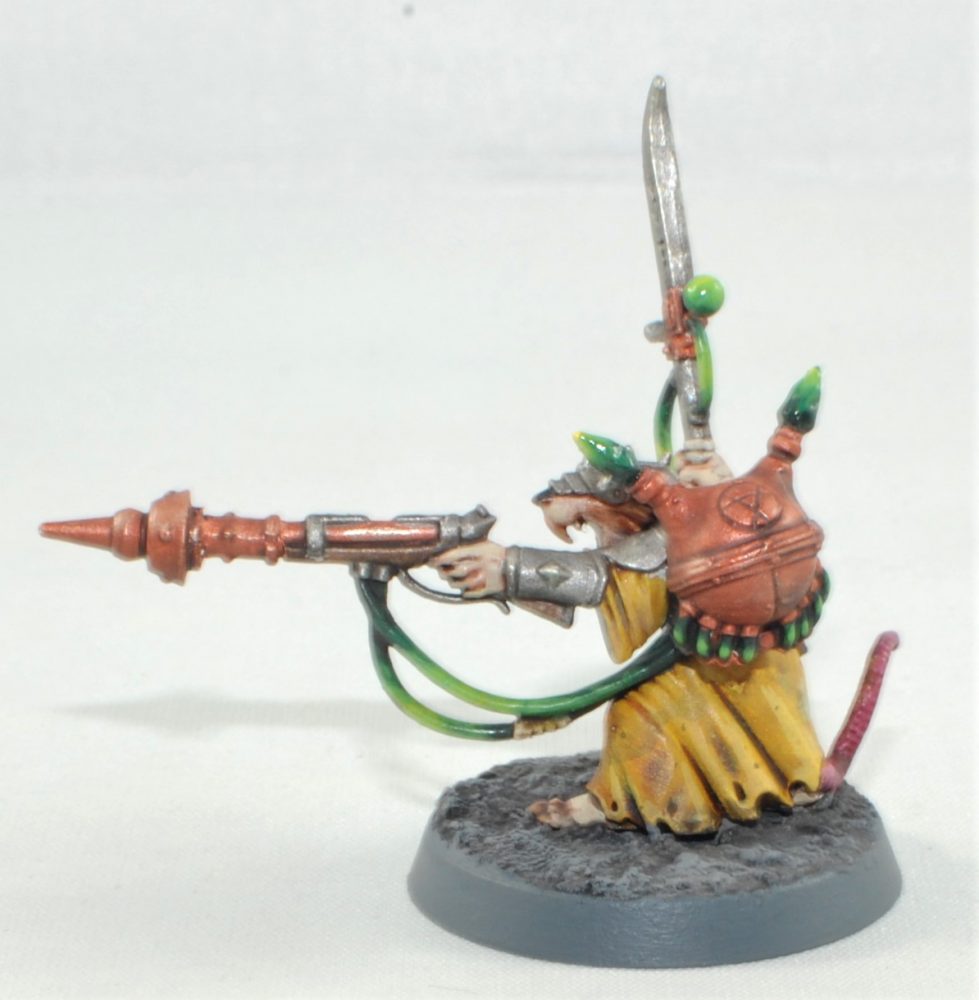 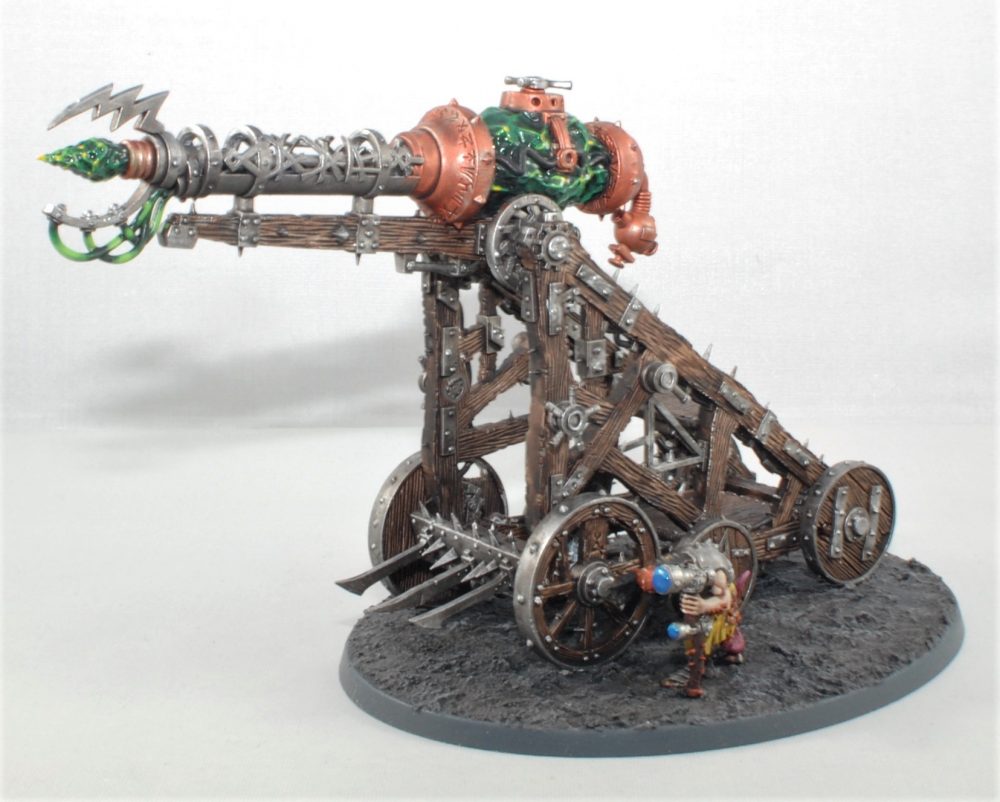 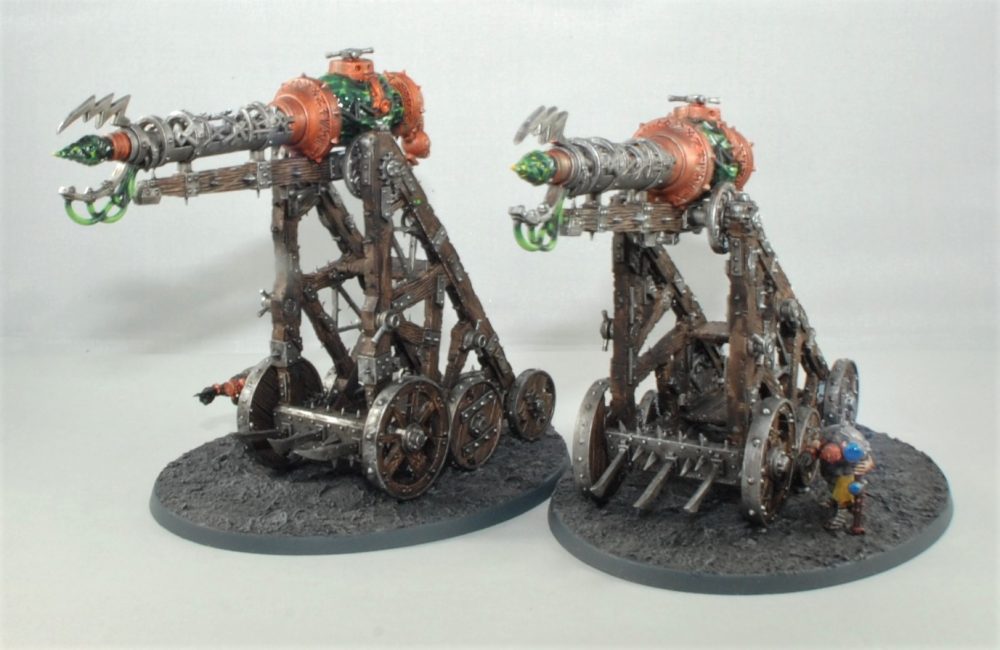 Next in line for the Skaven. I need to complete the last 20 Monks. They are primed, I know they will paint quick. Just sort of forcing myself through them. I have all the parts to make a great display board just not sure if I am going to spend the time on that right now. I also have about 40 more rats that I would like to build so I can change my list up a bit. Also I think I will be buying a Warpseerer. I want this to be my tournament army for 2020. But just not as sure as I was a few months ago, the FAQ hurt. I think they can compete, but I may be poking my nose around other books to see if I find something I like.

One Reply to “Pre-Texas Masters Update and Thoughts”