Just played in the Prep For Slambo Tournament at Atomic Hobby here in the Houston Area. The tournament was a warm up for the Slambo GT that will take place in San Antonio in October. The missions and scoring were from the Slambo packet.  It was a good turnout of 18 players, that’s a great number for a local 1 day tournament.

I am running a similar list as last time:

This will be a shorter than normal after action report, just got life going on right now. “so no in depth breakdowns”

My objectives for the tournament:

I did not meet my goal of 40+ points, but I was able to complete the rest of my objectives.

I was matched up against one of the best player in Houston, James West. He was running his Squig list. This is James “fun and fluffy” list. The list hits very hard and has lots of tricks. The mission was basically Boarder War with some extra rules. I like playing James because he knows his stuff and has good tactics, it makes me a better player to play opponents like him.

I feel it took us a while to get the mission rules correct and get ourselves deployed and start rolling dice. The game felt very swingy, I never felt I was out of it, but there was a few times that good rolling on my part saved the day. I will say that James rolled bellow average.

This was the first time I have had the chance to play a full squig army. It was a very fun and unique army to battle. They hit sooo hard! I can see why this list would give some armies trouble, especially elite armies. The key for playing his army for me was to get the charge and kill him before he kills you. This is easier said than done.  “all the randomness”

I came out of the game with a major victory and managed to complete 1 of my secondary objectives. 17 total points. 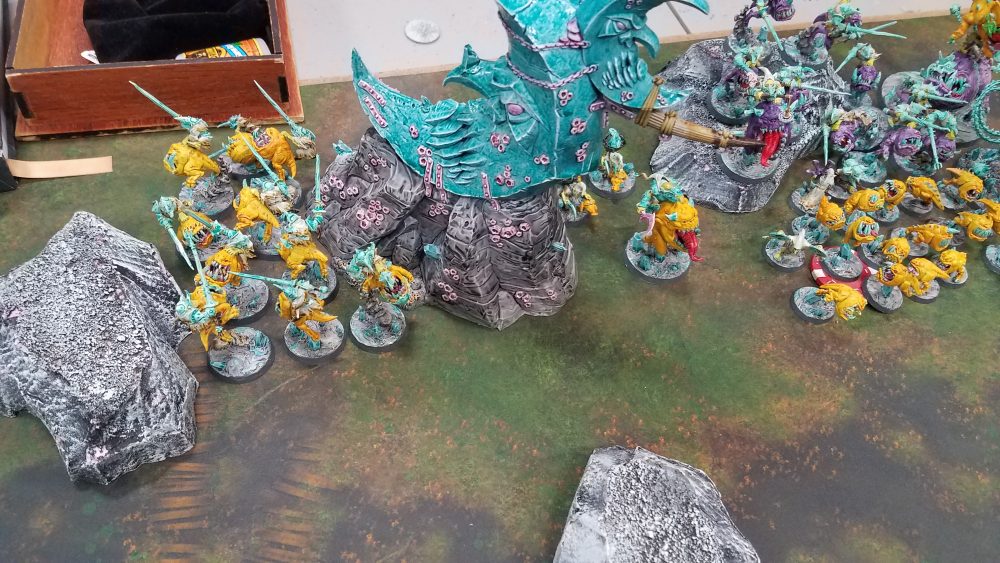 I was match up against Tim Frisbee, and his 100 Gloomspite Gitz. So yes I was matched up for a second time against those nasty Goblins. His list is 100 total Stabbas with nets and fanatics , 3 or 4 HQs that spam mortals, a unit of squigs and a Black Smoke Battery Mercenary Company with a cannon and Gyrocopter. The mission was Pinata. Yeah you will have to read the packet to get an idea of how this mission worked. In short the mission itself is not that bad, however the extra rules are a lot to remember. To be honest me and Tim forgot to use most the extra rules after the first turn.

I have played Tim before and I have seen him run lists similar to this several times. So I have a good idea of what he is trying to do. I took first turn to get the guarantied 1 point. I expected him to come to me at mid field, however he held back. Unfortunately his shooting and magic put several wounds on all my Bloodthirsters.

I won the roll off on turn 2. This was the biggest decision of the match. I think the smart answer would have been to take the 2nd turn and move the objective behind my line. On retrospect it was probably the correct answer. However I was worried that he would shoot me off the board and then I would have no way to stop him from just smashing me. I decided to go first. He moved the objective next to his 100 Stabbas, I was confident I could take out his 40 man unit and then It would be an HQ smashfest in his backfield. Well that did not work out. I was able to charge all 3 of my BT into his 40 man unit and my Skullcrushers charged his 60 man and Mangler Squigs. It was looking good after the charge, however during my combat the negative 1 to hit from the netters stopped me from doing max damage. I was really hopping for the Rage Thirster to roll a couple of sixes on his wound rolls, I got one 6. I killed 26 stabbas and a unit of fanatics, but he was immune to battleshock and I was not able to take the objective. On his turn 2 he started killing my bloodthirsters. It was all down hill from there.

I had a chance in turn 4 to pull off a tie, it was a very close deal that came down to half an inch an one model. But it was not to be, at the end of the game I only had 5 models reaming, not counting the summoned unit that I tried to steal the objective with. I managed to make 2 points on the secondary objectives.

Would I do the same thing again? Possibly, but my goodness it is just an extreme amount of bodies to chew through. If we would have been on a different mission I may have had a better chance against his army but still no certainty on that.  Hist list counters what mine does.

Tim was a fun opponent and it was a good game. 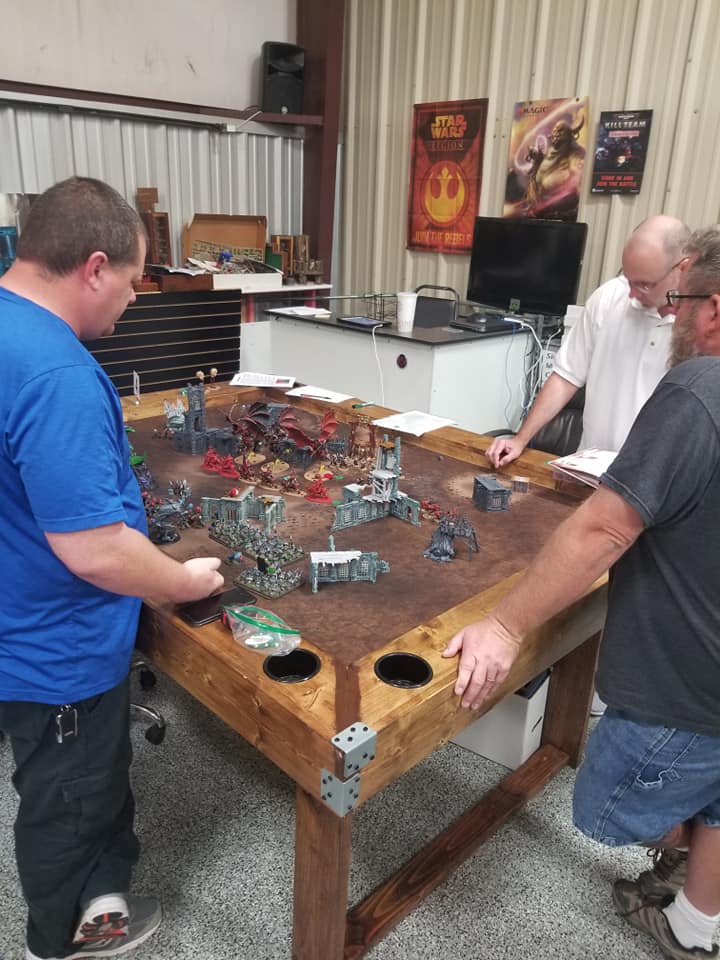 In game 3 I was match up with Ryan Parker ,who would have thought that I would end up fighting him in 2 straight tournament in the final round. He was running a list with Durthu, Treelord Ancient, and a Treelord, Alarielle, and a Branchwych, and 3 units of Spite-Revanants. I am familiar with his list and have a bit of an idea on what he is try to do. The mission was Remember the Alamo.

The biggest things I was worried about in his list are the stomps and Durthu, he hits harder than my BTs and the stomp would have use striking at initiative. A good questions came up during the game as it relates to in interaction with stomps, Halo of Blood, the Tyrants battalion rules and sequence.  We resolved it by saying the models without the Halo have to attack at the end and not activate with the other if they were stomped.

This was a back and forth battle. I probably should have won the mission, I had him down to 3 remaining models, but found myself out of positions to hold the points. Parker played it nicely and almost pulled off the upset. We ended up tieing on points, but I won on kill points. So this gave me a minor victory.

Parker played it aggressively coming at me and getting a 1st turn charge with Durthu. I systematically went down his line killing his units. The biggest problem I had was my dice went stone cold in turn 3. I could not cast anything from my priest. I needed to kill hist Treelord Ancient in that turn so I could move my units around in turn 4 to take the points. But I guess 3 Bloodthirsts are not enough to chop down 1 tree. All in all it was a close run game and I had a chance to get a major win, but slipped up and it cost me about 4 positions in the standings and about 8 Texas Masters Points. 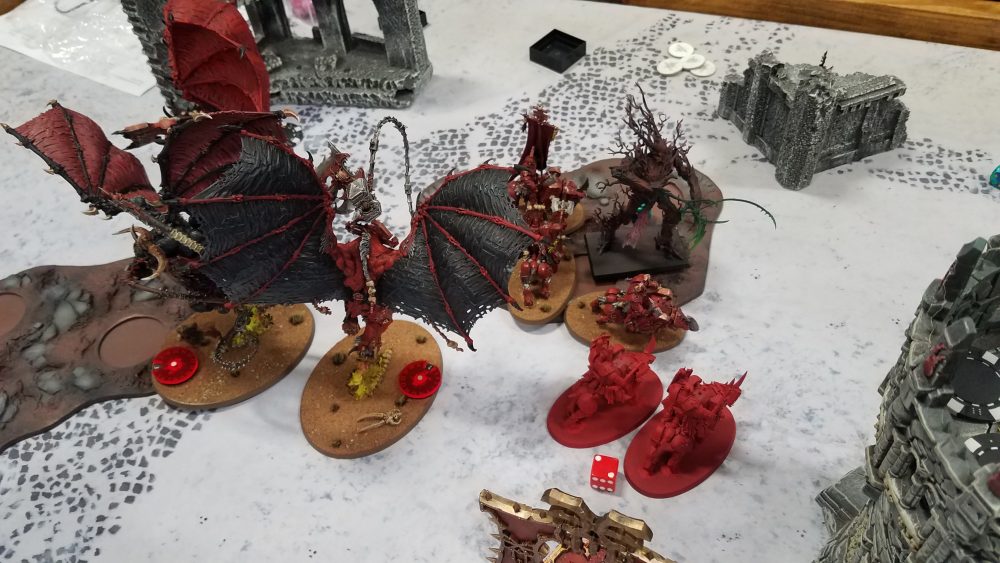 The top 10 results of the tournament: 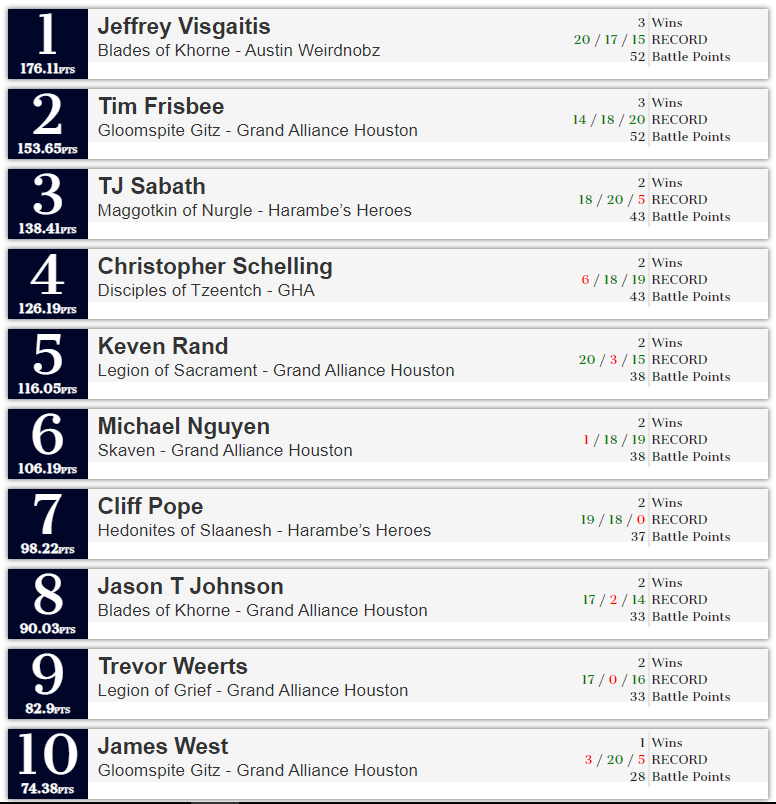 I did not accomplish all of my goals, however I did ok and it was a fun day. I learned a bit about Gitz and got an opportunity to see some of the best players in Houston. My list preformed decently and I feel going into Slambo I can win 3 or 4 games, depending on match-ups. On the other hand I many not win a thing. We shall see.

Not a big fan of the mission packets, not they are not fun in concept, just that it is sooo much extra stuff to remember. I think they went a little overboard with the extra rules, I will play and have fun. However look for a bunch of angry nerds on game day spewing hate about it.

My Masters points at the end of the month should be 262, right now that would put me in the top 10. We will see, I have 1 more GT and one local to get an many points as I can for the invite. 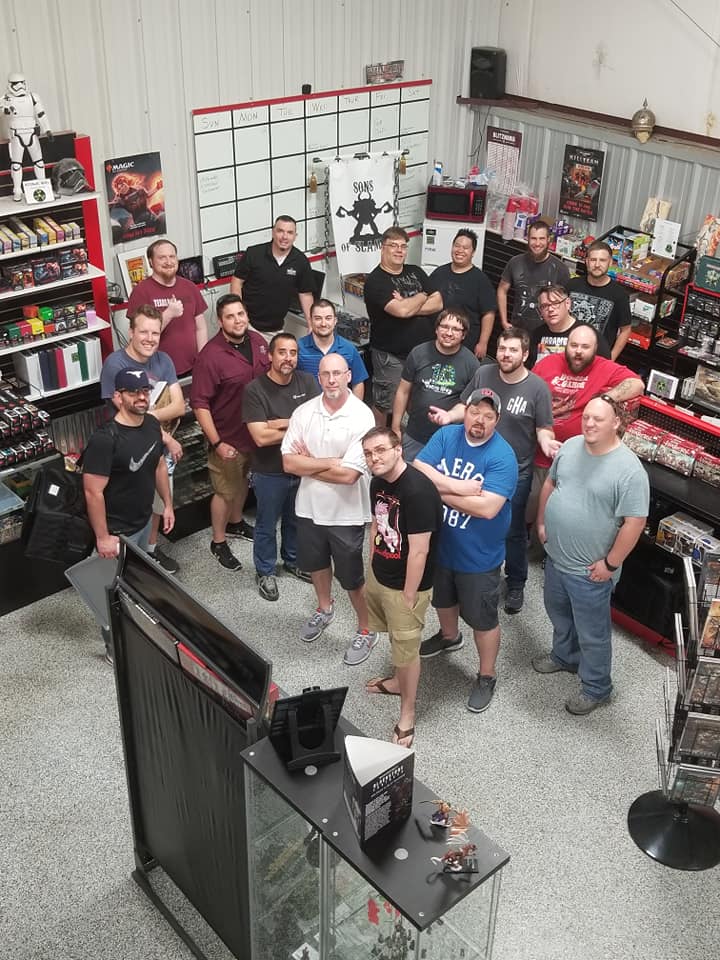